I can take some off their hands. I'll even pay for shipping.
"
Canadian marijuana manufacturers are sitting on 1.1 billion grams (2.4 million pounds) of the drug that they can’t sell as the country’s legalized weed industry runs out of puff.

Last October, Canadian cannabis firms had around 1.1 billion grams of harvested or processed cannabis sitting in storage. Around 95 per cent of that weed is considered ‘largely unsaleable’ because it has been spoiled by time, and because there’s just too much existing supply to try and sell it.

The low quality of the products as well as the slow process by which the provinces allowed for licensed stores to sell the cannabis in the years since legalization is being blamed for the destroyed stockpiles.

Big corporate firms that rushed into the newly-legalized industry have also been blamed the for issue by expanding too quickly.

Smaller mom and pop businesses which know their clientele better say some of the rules the corporate giants want – such as growing the drug indoors, to stop teenagers with drones stealing their weed – show how poorly they understand their market.

Canadian marijuana users also prefer to get their products through illicit means as about 50 percent of pot that is consumed north of the border is obtained on the black market, according to The Walrus. It is unclear why the demand for illegally-grown weed continues to boom, although experts say it may be because illegal dealers will sell people more of the drug than their prescription allows for. 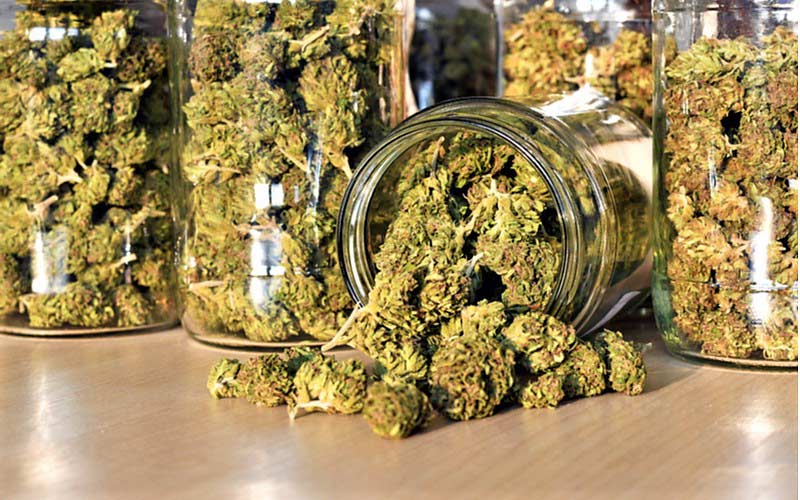 Canadian marijuana manufacturers are sitting on 1.1 billion grams (2.4 million pounds) of the drug that they can't sell as the country's legalized weed
www.420magazine.com

Why was I not doing this years ago!?

First of all there are exception provinces in Canada - Québec and Manitoba i was told. In mine the worse possible dealer happens to be "legal", not to mention our present prime-minister François Legault feared it might risk to fuel sales to minors in schools somehow (readers familiar with Québeker things may be aware of the rest)... In any case i find our SQdC is NO "raw model" for youth nor society; what it teaches instead is abysmal irresponsability and greed implemented on an industrial scale, while they'll let already responsible over-billed/over-taxed adult clients leave the store with 4 months old stock not even produced on our territory, which means we're also pumping green money through multiple provincial borders in exchange for junk. Briefly put, judging from past samples i'd have to comment that quality rarely rates above fair bargain anyway: it's nearly always detrimental and we must show our ID cards just to pass the door and access the privilege, despite white hairs or none...

Some bags come with a pouch of 62 % RH regulator, others don't. Feels like gambling... Besides a most disturbing red logo i noticed no visible indication to inform about any related eventual preferences; at times it's divided as groups of closely-shaved (+"tumbled") nugget sizes and practically never reaching the large/jumbo format of course, often enough with its frosty layer seriously compromized. CBD which can be considered a captive market actually costs even more while one may as well find long tiny grapes of immature calixes with lots of wood too thin for convenient removal at grinding time. Not much crystal shine neither and it confirms with an absence of the typical screeching noise that i'm used to hear when stirring, approximately similar to the texture of salt + sugar mixed with a bit of flour.

This is to illustrate that later case:

Go try to get 2:1 at the SQdC and ask that it also provides a satisfying "spectrum". It doesn't exist - by design one might add! Maybe in our world THC and CBD happen to be reciprocal "modulators" but not in one dating back to the victorian age, busy chasing black cats and witches...

Looking at the 4 main cluster densities it's strongly suggesting that ain't even close to any natural distribution at all: to me it's man-made allright and the darker THC groups appear to add a notion of time i shall add, since THC-centric selections existed long before bigot prohibitionists invented some artificial "therapeutic"/"medical" vs "criminal"/now "recreative" fracture to justify their war. A war which turns out to be about full-time jobs in a sin industry essentially denying sensory input, while calling us libertarians, activists, advocates and the like. Elders get punished in a symbolical sacrifice to "save" yet-to-be-born kids who would get no help from none of this madness - the "raw model" finally makes many of us deeply miss the good old ways, as when we could just stop dealing with abusive mercantile individuals - end of story.

Kids are no fools and if i were one myself this would only teach me corporate crime rendered legal. As an annecdote, personally i can testify being informed of an occurence where the SQdC clerk systematically picked the older batch over a fresh one when given an option to choose, e.g. he flushed crap that i figure probably didn't sell elsewhere... Should it sound surprizing? No more than a victim of gang-rapists near the Nth time, ah and the victim was aged avove 80! What for if not money alone?!!

All the "légaleezation" of Trudeau did for us was to perpetuate stigmatization and everything along this line as long as it may please a voter (angry) base satisfied with such socio-toxic attitudes, never mind the consequences in a world of ZERO accountability and annonymous legal democratic (!) hate mongering between a couple "cool" alcohol TV adds. Don't mention his Task Force's bogus "consultation" which ignored simple regional/social differences, with no dispensary culture installed and only *1* single "LP" until 2016, as i recall. The later having to change its name from Hydropothecary to Hexo while promising "kosher" in an attempt to burry reminescences of (BANNED) myclobutanil causing a mini-scandal later minimized by Health-Canada, HCN conveniently transforming by heat into a Level-3 item of the Chemical Weapons Convention that is masked/hidden as a result of most people's consumption method: smoking... Etc.

So, it's only to expect when consumers turn their back on dishonest fools who abuse simply because they can. Considering the joint UN/WHO declartion of mid-December 2017 on CBD there's just no good motives to excuse the present inflated market situation today, knowing Québec's GreenHouse Producers Association once announced they were ready and willing to offer "bio" with the same tracking as for chrysanthemums under 3.50 $/g or so!

Last time i dared check for CBD it was selling closer to 8+ $/g and crappy as hell. No incentive there, like it was programmed to fail before the reform even began. Etc., etc.

Poor understanding or volountary negation of reality? The level of insult is such i may think both.